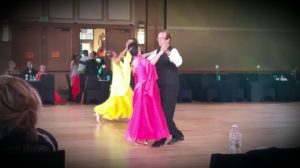 The American Foxtrot is the most popular of the smooth dances. It’s smoothand syncopated moves lend itself to a variety of music. Beginning steps are simple and achievable for the novice dancer.

The Foxtrot was originally considered a dirty dance, along with the other animal dances like the turkey trot and the grizzly. It originated it 1913 when a Vaudeville actor by the stage name of Harry Fox Trotted his American beauties ( the dolly sisters) between the acts of the Ziegfeld follies. He did this to Ragtime music, and later did It on the roof of the New York theatre. Arthur Murray embraced it and sold the first mail order dance lessons for the Foxtrot. Then Vern and Irene Castle took it overseas to Europe and introduced it to the Imperial society of teachers of dance. 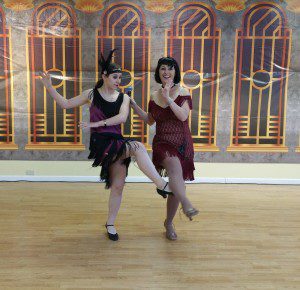 The Foxtrot is danced to slinky, jazzy American music in 4/4 time. It has an uneven rhythm with syncopated slows and quick’s at a tempo of 28-32 bars per minute . American Foxtrot utilizes the original Ragtime moves with the underarm turns and jazzy moves. It is immortalized by Fred Astaire and Ginger Rogers in many films, with their side by side tap and jazz moves spinning effortlessly into and out of closed ballroom holds.