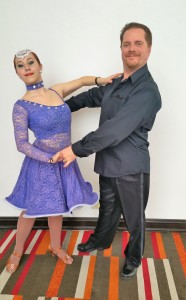 Learning to dance with a partner is very rewarding. It provides a physical conversation between two bodies in time to music. Picking which dance is perfect for your conversation with your partner sets the tone for your learning.

Rumba, a slow sensual dance, is the Latin dance of love. It is a provocative dance of seduction, and temptation. With undulating hip actions and flirtatious moves, this romantic and sultry dance makes a great addition to any dance repertoire. It is a very handy dance for weddings and social gatherings.

The Rumba originated as an African dance brought to Cuba by African slaves in the 16th century. The name Rumba means, “party,” or “a good time.” The music was written for the dance, as was the song “La Paloma” written in the mid 1860’s. In Cuba, the rumba was known as Son, a popular Cuban middle class dance. The wealthy Cubans danced the Danz’on a slower version.  In 1913 Joan Sawyer and Lew Quinn attempted to bring an adaptation of the Son to America. It then came to New York in Greenwood Village in 1925. Arthur Murray started teaching the Rumba in New York as well, and introduced the box pattern to the educated upper class. Xaver Cougat formed a Latin-American Orchestra in the late 1920’s and opened the coconut Grove in Los Angeles. “The Peanut Vendor” was published in 1930 and Latin music took off in America. In Film in 1935 the movie “Rumba” hit the box office. Rumba has been here to stay since.

The Rumba is danced to music in 4/4 time music with an emphasis on beats 1 and 3 in a box pattern. The speed of the music is 128 to 144 beats per minute. It can be danced Slow, Quick, Quick, or Quick, Quick, Slow. The hold is extended to allow for room for hip action, known as Cuban motion. Underarm turns and open actions embellish this dance.

For more dance tips or for personal wedding dance coaching in