I love dancing and discovering other ways to dance. So why look over the pond for another way to dance the same dance? Isn’t the American Rumba just fine? As my favorite coach used to say, “The best of anything is good.” So to open the mind to other ways of looking at a dance or rhythm invites creativity.

The International Latin Rumba is sexy and stylish. With its ballet like pointed toes, and long tendu lines, it merges classic ballet with Latin dance. It expresses passion and desire through the tapestry of movement.

The Latin Rumba has the same origins as the American Rumba. African slaves in Cuba mixing with the Spanish settlers. This Cuban rumba is also thought to be influenced by the Habanera. The result of all of these influences is the dance of love, the Rumba. The international Rumba parts paths from the American Rumba in 1931, when the craze from New York with “The Peanut vendor “was heard of in Europe. The influence from the States caused the European music to be “hotted up” making the rhythm hard to follow. Until they imported Latin bands with complete instrumentation. Europeans stared to flock to smart hotels and restaurants to try out this new spot dance. This led to “crush dancing” or “rhythm dancing” suitable for the smaller floor. After World War II Peter Lavelle took a trip to Havana to learn the authentic rumba. He found the Cubans broke on the two beat, and broke forward and back. He based his international syllabus on the Cuban style of Rumba.

The Latin Rumba has a provocative and sexy nature. Its small steps and soft knee flexing leads to the rotary action of the hips. Feet and legs are extended and released throughout. The frame is extend in front to allow room for the bending and straightening of the legs. The music was originally in cut time, but was standardized to 4/4 time at a tempo of 115 beats per minute. Weight transfers happen on beats 2, 3, 4 (hold 1). The footwork is Ball flat with a forward poise towards the ball of the foot. Spot turns and fan positons peppered throughout. A passionate dance to watch or perform. 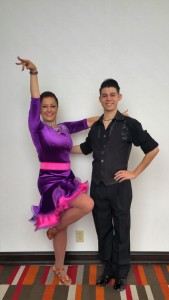 2. The Latin Rumba has a provocative and sexy nature

3. “Crush dancing” or “rhythm dancing” suitable for the smaller floor

6. Soft knee flexing leads to the rotary action of the hips