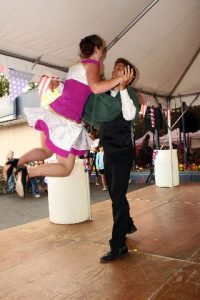 Everything old is new again. So it is with the Lindy hop. This is the original swing from the end of the 1920’s and mad popular through film in the 90’s. This is a fun dance for college students and wedding couples looking for something unique!

Lindy hop came out of the black bottom, shag, and the Charleston. Its first official day was in 1927 at the Savoy ballroom, when a dancer nick named “Shorty George” looked at the news stand, and declared that they were dancing the Lindy Hop (named for Lindbergh’s flight ‘hop’ to Paris). The Lindy hop was confined to Harlem for many years as a Negro dance. Early Jazz music and the Lindy hop were considered by dance teachers as vulgar. They felt the music was a, “denigrated form of Jazz” for “people of economic instability”. Later band leaders looking out at the sea of flying legs and arms declared that it looked like the dancers had the Jitterbug (which is how people drying out during the probation looked.) Others say Jitterbug then became the name for Lindy hop when Charles Lindbergh fell out of popularity with the public. In 1934 Cab Calloway introduced his song the Jitterbug, sealing the fate ‘Lindy hop’ name.

For years I have wondered what happened to the widely popular big bands and the swing dancing of the 1930’s. Then recently I read that in 1944 congress instituted a 30% tax on grand ballrooms and dance halls. The large dance halls could not support this tax, and closed, putting most big bands out of business. It was not until the 1950’s with the new rock and roll that people would return to a smaller dance floor.

Recently, the Lindy hop has had a revival, with the movie Swing Kids in the 1990’s and later on dancing with the stars. The Lindy Hop can be danced to music 110 BPM, but it is even better to mid-tempo songs around 130-160 BPM. It is most commonly danced to throwback big band music. Social Lindy uses lots of fun kicks and turns. In show or competition aerial’s and acrobatics are included. This is a fun throwback dance.