Dances of Love with the Arapahoe Philharmonic

The church was large and grand with a towering ceiling and hallways leading for days. Hushed murmurs and 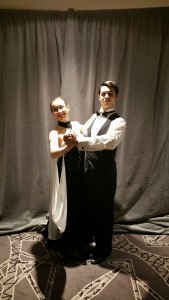 laughs could be heard throughout the crowd as the wandered through the double glass doors. Among them emerged a glamorous couple. The man dressed in black with a white shirt and bowtie, hair slicked back and a warm smile on his face. The woman in a short burgundy dress, glimmering with rhinestones. They stood apart gazing into the vast crowd and then slowly walked out onto the carpeted floor. Music drummed from the speakers as the dancers beat out a Paso Doble, while people paused and watched, curious. As they paused breathless after their cha cha, the dancers introduced themselves as from Adventures in Dance. They beckoned some of the youth from the crowd to come and join them for a cupid shuffle. After all, valentines was just a day away. With much cheering from the crowd the kids danced and turned shuffling this way then the next. The crowd cheer enthusiastically as the kids shyly shuffled from the spot light leaving the Adventurous dancers to finish with a spicy rumba then samba.

The crowd gathered eagerly in the auditorium where on stage musicians plucked and tuned. Each looked stunning in black in sharp contrast to the brown wood and bright silver and gold of their instruments. The mood was light and merry, even adventurous as the conductor raced up the steps and bowed. They played Richard Strauss (1864-1949): Waltzes, First Sequence from Der Rosenkavalier, Manuel de Falla (1876-1946): Suite No. 2 (“Three Dances”) from The Three-Cornered Hat 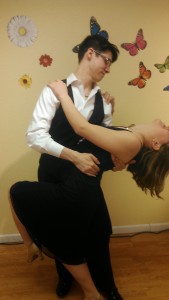 The Bolero was mixed with funny stories about love, hate, and life in-between with the musicians emphasizing the high and low points emotionally and musically. The Bolero is a long seventeen minute song with a crescendo dragged out through the entire thing. Now for some this might sound like an incredibly boring thing to sit through a song that is playing the same tune over and over again with each instrument, but you’re quite wrong. The conductor on the stage started with not one, but five batons, and made a humorous show of testing each one out before finally settling on one. From there the music proceeded normally with the conductor conducting until suddenly he turned waved to the philharmonic and walked off stage while they were playing. The audience buzzed with surprise as he prowled among them and then selected a young woman and handed her a baton, he escorted her up to the stage waved and left her there in his position. Much to her credit she conducted quite well aside from her apparent surprise and she wasn’t alone. For the remainder of the song the conductor raced out among the crowd and bestowed batons upon the unsuspecting audience members for them to go up and get a taste of what it is like to conduct. At the end there was a hearty applause for our many conductors and then a release for intermission.

Waiting for the intermission crowd were William and Robyn from Adventures in Dance, on a different part of the vast carpeted floor. This time Robyn was adorned a black and white gown that brushed against the floor. The music began and they awed the audience with whispery waltzes, snappy tango, hoppy quickstep, and finally an elegant Viennese waltz that drew a crowd twice as large as before. With a twinge of sorrow the dancers bowed before a roaring audience and waved their goodbye’s receiving many compliments from the crowd and a hearty thanks for performing. While this adventure has ended for our Adventures in Dance couple, you can be sure that they will soon be back on the floor to awe you again. In the meantime friends dance with happy feet!

For more dance tips or for personal and wedding dance coaching and classes
south of Denver, north of Highlands Ranch, east of Ken Caryl Valley, east of Greenwood Village,
in Littleton, contact: