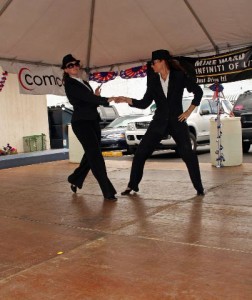 The West coast swing, is a creative and interpretive swing dance. This is a partnership dance that leaves room for both dancers to insert their own ideas and movements.  This is a good dance for creative and expressive individuals.

The West Coast Swing is descended from the lindy hop. It was first noted as the, “Sophisticated Swing” in 1938 and many of the big bands recorded songs about this swing. By 1947 Arthur Murray was sending his staff out to document all the varieties of swing. One of his staff on the west coast, Lauré Haile, documented the western swing. Her work was published in 1951 for the Arthur Murray studios. At this point most of the wild moves and tricks of the Lindy hop fell out of popularity in the ballrooms. This was sped up by the Federal excise tax on dance halls in 1944. After this many people turned to the television to find the latest dance moves. You can see the early West Coast swing in the movie, “Hot Rod Gang.” Some people claim that the slotted movement of the West Coast swing came out of the films like this one where producers were asking the dancers to dance in a slot to keep them on the camera. Others claim it became slotted because there were so many students at the clubs crowding in to learn that the teachers put them all in slots to fit them all in.

In 1961 Skippy Blair recommended that the Western Swing be renamed the West coast swing to avoid confusion with Country swing, and by the late 1960’s the name West Coast Swing had stuck. In this same time, the original coaster step was replaced with the anchor step. By 1988 the West Coast Swing was named the state dance for California, and it still rules there today

Characteristics:
The West Coast Swing is a slotted swing using compression and release between the partners. The west coast swing is one of the few partnership dances that encourages improvisation. Its open hold allows each partner the space to improvise while staying connected with each other. The West Coast swing begins with a walk on 1,2 instead of the rock step like in the swing. The patterns are done to both 6 count and 8 count sequences. West Coast swing music is in 4/4 time and can range from very slow to very fast. The standard tempo for West coast Swing is 102-128 beats per minute.  It can be danced to Big band, Jazz, Blues, Rock & Roll, and contemporary music.  West coast swing is often called a dancers dance, drawing on the vast experience to create moves on the fly. Truly a fun dance to put your creative energy into.