The Cha-cha is a happy and lively party dance with lots of variations. It is a cheeky and flirtatious dance that goes to a wide variety of music. Cha-cha is always a 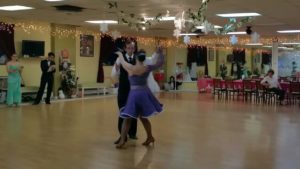 welcome guest at weddings and parties.

In 1940’s Cuba, Enrique Jorrin played a traditional Danzon with a new syncopated beat and called it the Cha-cha. It sounded like a slow mambo, and was danced with a triple hip motion (triple mambo). Perez Prado, a Cuban band leader famous for Mambos’ and danzons, moved to Mexico in 1949. In 1950 while on vacation in Mexico, Arranger Sonny Burke heard Prado, and wrote the hit “Mambo Jambo”. This inspired Prado to tour the US in 1951 and sign a record deal with RCA. In 1954 Prado starred with Jane Russell in the movie “Underwater” featuring the song ”Cherry pink and apple blossom white”. The Cha-cha had now caught fire in the US and Americans were Cha-cha crazy.

The Cha-cha is one of the 5 American rhythm competition dances. Cha-cha is danced to 4/4 time music at a rate of 120 beats per minute. Cha-cha can be danced to Cuban, Latin or Pop music. It’s rhythm is 1,2,3,4&, and can be danced in open or closed hold. It is danced with forward poise and delayed Cuban motion.

For more dance tips, join my email list,
or for personal wedding dance instruction, coaching or adult dance classes and lessons sign up for a dance class at our Littleton dance studio.