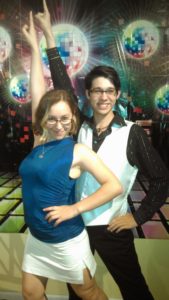 Hustle in and Club dance with a partner. The hustle ushered back the romance of touch dancing to the Disco scene. This all American dance is great to take out on the town to any nightclub or social occasion.

Hustle began in the Disco’s. Discotheques means a record library. Discotheques began in Paris in the late 1940’s. The first Disco in New York was called “Le Club” and by 1965 there were over 5,000 in America.

Hustle is the Dutch word for “shake” and a hustler is someone who shakes you up to pick your pocket. In America, hustle refers to a ‘go getter’. The Hustle dance began in the Latin Harlem of New York around 1972 and quickly took over the Discotheques.

Young people would gather at Disco’s to compete in dance and exchange ideas. Recorded Disco music would be played between sets and the youth would combine moves from Mambo, Salsa, Cha-Cha and Bolero. In “The Grand Ballroom” in 1973 and new touch dance was developing. This simple 6 count dance was a return to touch dance, romance, and a way to meet ladies.

By 1975 Marty Angelo created the first all disco television show, Disco step by Step. Van McCoy recorded “the Hustle” after sending his partner to check out the “Adam’s Apple” club in New York. “The Hustle” Was the number one hit by July of 1975. Other popular Hustle songs include “I Will Survive” Gloria Gaynor, “Last Dance” – Donna Summer, and “Night Fever” – Bee Gees.

In 1977 Hollywood caught the disco fever. “Saturday Night Fever” hit the theatres and accelerated the Hustle dance craze across America. There were many kinds of Hustle, and they include but are not limited to the Latin Hustle, the New York Hustle, the Line dance Hustle (even the Electric slide came out disco and Merengue) and the Tango Hustle, created by the cast for “Saturday Night Fever.” The Hustle was here to stay.

TV shows picked up talented Hustle dancers. Eddie Vega with his partner Lisa Nunziella Hockley won the Ed McMahon Star Search. Many other great dancers gathered to get down and Hustle.

The Hustle is similar to the rock and roll swing, however it is danced more in a slot and begins with the rock step. Swing dancers had an easy time picking up the hustle in the 70’s. The Hustle is a fast smooth dance that draws partners together, then apart. Turns, spins, and wraps are then added to the Hustle basic. As dancers advance they use syncopated timing and fakes along with elaborate arm styling.

One thought on “Hustle-A Popular Social and Wedding Dance”