Dancing with the Mon-Stars Showcase 2015 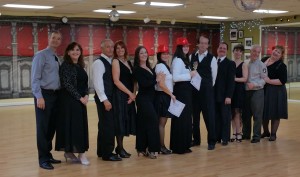 On Sunday October 4th, 2015 the students and staff at Adventures in Dance gathered to share their latest routines.  Arriving at 4 pm, guests were treated to witches brew spiced cider and appetizers. All the good ghouls and boys grabbed their partners and warmed up with a few rounds of social dances.

At 4:30 pm Holly, dressed as Morticia Addams, announced the first routine. Guests took their seats to be entertained, and Niloo took the stage with Craig to dance her Cha-cha to “Torro, Torro, Torro.”  It was a hit. Next, John Waber and Mary Bescher were “In the Mood” to dance a swing in their fetching WWII outfits. They were hip cats!

Featuring the Addams Family Theme, Melvin Marcusson danced a marvelous mambo to “When you’re an Addams” with Holly dressed as Morticia.  It was dark and daring.

Jim and Linda Dunbar did an outstanding segue routine with three dances. First they did an international Waltz to “Open Arms, “then a Quickstep to “Spiderman” and closed with a Foxtrot to “Come fly with me.” This was an intricate grouping and they nailed all the transitions.

“Earthsong” was a moving waltz that Larry and Sheryl Gray chose to dance to. They displayed all their new moves in their silver American waltz. Well done.

To close the show, the mother-daughter team of Shayao and Sabrina Mc Farland danced with Holly and Craig. They chose the contemporary song “Uptown funk” and danced their Cha-cha with moves from the music video mixed in. It was a hit.

After social dancing and Awards, The staff from Adventures in Dance presented their show. Robyn and William put together a Cha-cha to five nights a Freddy’s. Mixed with Robyn’s usual interpretive flair, this piece was moving.

Craig and Holly chose to keep with the Addams Family theme. They chose music based on the original songs danced to by Morticia and Gomez Addams. They danced a Tango-Paso Doble segue. It was dark and delightful, weaving in the stereotypical Gomez, and Morticia Addams moves.

At the end of the meal, the dance music kicked off, and dancers took to the floor. For the mixer, the line dance from “when you’re an Addams” was taught. It was a blast and everyone had a good time. I am personally looking forward to our next event, our Snow-Ball and Am-Jam.