An Interview with Holly Collins the Owner of Adventures in Dance 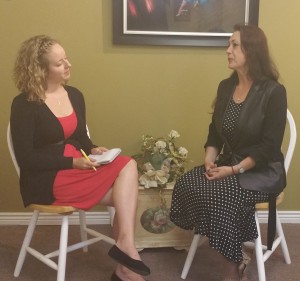 Sitting in the cool airy studio after the last dancers left for the night is Holly Collins, the owner and instructor at Adventures in Dance in Littleton. With freshly brushed hair and friendly smile, Holly sat down with impeccable posture. After a full day of instructions and dancing, Holly was still energetic and in good spirits at 9:30 at night. Due to her busy schedule this was the only time Holly could sit and chat.

Holly grew up in Santa Cruz, California tucked 2,000 feet up in the mountains and as a child always wanted to dance. She had a traumatizing experience in a tap class when she was in kindergarten and would dance the wrong direction. When all the other children went right, she went left.  After that her mother banned her from dancing. She found out why her dancing and school work was suffering, she was diagnosed with dyslexia in the third grade.

From that point on, Holly learned how to live with her diagnosis and succeed.  In college, just to irritate her mother, Holly started dancing.  She became the secretary of the Social Dance Club at San Jose State University where she began to look around for more information regarding ballroom dance.  She walked into a private studio where the owner grabbed her and said that she must dance for him.  She signed the dotted line and started teaching the next day.

Holly working for large franchise studios Holly started Adventures in Dance, a name that came to her in a marketing class.  These studios had their own way of doing things. Everyone learned the same routines the same way.  Holly never agreed with this way of learning. Her past experiences taught her that people learn in different ways, at different speeds and in different capacities. She wanted her students to learn what style they wanted to dance and how they wanted it choreographed. This customization helped fuel her passion to open her own studio.

In her discovery of dance and opening her own business, Holly decided her favorite dance is the foxtrot.  She said it is a fun, flirty and sexy dance.  It was once banned by the Pope for being too sexy and animalistic in the early 1900s.  That doesn’t stop Holly though she enjoys the fun cheekiness of the dance.

Starting her own business had its own set of challenges but Holly’s biggest fear was not being able to feed her children. She started her business as a newly single mother of two and needed to provide for her family.  She had to succeed as a dance instructor to bring food home for her little ones. After 13 years in the business, Holly can rest assured that her now grown children will succeed in their own endeavors.  She can let go of her fear and enjoy her love of ballroom dance.

For more dance tips, join my email
or for personal wedding dance instruction, coaching or adult dance classes and lessons on the front range,
contact:

(Amelia–>) Hi, I’m Amelia Martinez and I’m here with Holly Collins at Adventures in Dance. How are you doing today Holly? (Holly –>) I am super-duper Amelia, thank you. (Amelia–>) Of course, so I brought you here today because I have some questions about your business and what it is your do here at the studio. (Holly –>) Excellent, ask away. (Amelia–>) So where did you grow up? (Holly –>) I grew up in California in Santa Cruise on the Coast, my parents have property in the mountains so it was like I was hidden in the top of the mountains not quite as high as here, only 2,000 vertical feet. But we had just houses on the top of these mountains splitting the mountain range between San Jose and Santa Cruise. (Amelia–>) ok that’s nice, and what brought you to Colorado? (Holly –>) My ex-husband, he got a job here and was transferred here so I came. (Amelia–>) How did you get started with your dancing? (Holly –>) Excellent question. When I was going to college I was going to college on a music major against my parents’ better opinion. So I was in college and taking classes that they wouldn’t let me take otherwise because when I was very young my mother banned me from dancing. So when I was in kindergarten we had a traumatic experience in tap dancing class. I would go left and everyone would go right because I’m dyslexic and I can’t tell my left from my right. So my mother didn’t know that until I was in 3rd grade so we had a lot of problems with me failing through school until the third grade when I was diagnosed and then I could excel from that point forward. So in order to protect me from failing anymore she said, “No more dance.” So I got to college and started to dance because she told me “no more dance” So I went to check it out just to irritate her. So then I waltzed into a dance studio one day that I was checking out because I was the secretary at the social dance club at San Jose State University. So I started checking out private studios around town to find out more and more about ballroom dancing to help my club. I went into one studio the owner took one look at me and said, “You should be teaching dance, Start tomorrow sign right here.”  And so I did. (Amelia–>) Wow. How did you get your business started? (Holly–>) With Adventures in Dance it was a dream for me it started out that I had parted from some other businesses and was ready to strike out on my own. My previous training was working for a bunch of franchise studios and when you have a franchise studio every lesson has to be taught the same way. There is only one system for doing things and to me it seemed like a conflict of interest. Because every lesson had to be taught the same way I didn’t feel like every learner learned the same way you should adjust the speeds and the abilities or the information presented to a student according to what was best for them not according to what they were paid for. So my desire in starting my studio was to give people the opportunity to

Some people are thorough learners and take their time, some people are very fast learners and want flashy and tricks and fun things, let them have it their way. (Amelia–>) Customization. Where did the name come from? (Holly –>) I was working on some advertising classes and I realized that I was having amazing adventures in dance and I was going to foreign and exotic places through the art of dance as I studied the history and background of where each dance comes from. Like the tango from Argentina, the salsa from Cuba the waltz from Europe and Germany. So it’s very fun to say wow there’s all these interesting cultures and places and I can explore them right here in Littleton through the art of dance. (Amelia–>) And what is your favorite dance? (Holly –>) My favorite dance is the frisky foxtrot. It is a saucy, sexy, and fun little dance. It began with Harry Fox who was a bond build comedian it began in San Francisco and he called it Harry’s Friskies. And then later he took it to the zigs hill follies where he renamed it the Foxtrot and it became a banned dance by the pope because it was one of the evil animal dances of the early 1900’s. (Amelia–>) What is your favorite thing to do in the business? (Holly –>) Oh I love blogging. I’ve had these really fun series of blogs and the latest one I had a disagreement with my daughter over a mermaid tail and so for Christmas I made her, her own swimming mermaid tail. Which she ended up liking in the end. So I put together a how to video on how to make your own swimming mermaid tail and it went viral. That was very fun so I continued to create the how to videos like the bunny hop, or how to do the monster mash. We also have diverged off into a real fun series of how to do historically accurate princess dances. We’ve been putting together the full costumes and everything and researching what would be the real accurate dance for each of the princesses that you would know from animated features. (Amelia–>) That’s fun. Where do your ideas mostly come from are they mostly just random or..?(Holly –>) All kinds of places will be dancing along because there’s a lot of energy and it stimulates thought when we take hikes and walks together and just say I had an idea, wouldn’t it be fun to open up an event center that looked like a castle. Then my family said oh my back. (Amelia–>) And what is your biggest fear? (Holly –>) My biggest fear is, or was, not being able to take care of my children. Early on when I was starting Adventures in Dance my ex-husband left me and left completely so I had two children to raise and so I had to succeed absolutely. My greatest fear was making sure I could put food on the table for them. Now that they’ve grown up into successful grown adults, I’m able to do more because it’s not that I have myself and my children to feed and I was a lone parent because he left. Skipped the state and everything. So now we have a really wonderful business and place. They’ve grown up successful wonderful adults and I’m free now to let go of the fear of not being able to feed my children. (Amelia–>) Wonderful alright that’s all I have for you.