Timeline for the history of Tango Dance

I was asked in November to present a history of Latin dance for Littleton High School. One of the historic Latin dances is the Tango. Currently it is expressed in three different styles, International Tango, American Tango, and Argentine Tango. The Tango has so much history I was compelled to do a separate timeline just for Tango dance. Enjoy what I discovered below.

1786 – The Tango was developed in Spain and brought to Argentina through the African slaves and settlers. The name Tango was a term used for the dance that slaves and blacks did as documented in 1786. It was called the “balle con corte’ ” or dance with stop.

1850–  1850s choreography of The Tango, “a South American dance,” by M. Markowski of Paris, as described in 1856 by Charles Durang of Philadelphia.

1875– Georges Bizet’s 1875 opera Carmen made the Habanera popular. Habanera is the popular name for “L’amour est un oiseau rebelle” (“Love is a rebellious bird”), and it’s beat structure influenced the Argentine Tango as well as the Cuban Danzon, Bolero and Rumba.

1874– Paris was swarming with street gangs, and they called themselves the Apache. In the early 1900’s The Apache gang in Paris France had a street fight. They were so proud of themselves that they re-enacted it in a form of dance in the underworld cabarets. I became known as the “dance of the underworld” and gave birth to the Apache Tango. When danced in films the Apache tango depicts a conflict between a prostitute and a pimp with slaps, kicks and violent movements.

History of Tango in the 20th Century

1900– The tango made its way to France by way of the wealthy Argentine vacationers, and then was banned in Argentina in the early 1900’s. The Grand Duchess Anastasie of Russia oversaw its development by Monsieur Camille De Rhyna. From there the Imperial Society of Teachers of Dance commenced standardizing the Tango. The Tango was also extremely popular in the Savoy hotel which offered Tango tea dances. With the refining of the tango by the French society, it was re-imported to Argentina through its nobility. It was re-introduced to the café’s and Salons in Rio de la Plata frequented by the rich. This cleaner tango took off in Argentina. Maurice Mouvet visited the underworld cabarets and fell in love with the Apache tango and modified it.  Mouvet and his partner Hughes performed the tango at the famous Moulin Rouge cabaret.

1910– The tango was then smuggled into America by Maurice Mouvet. 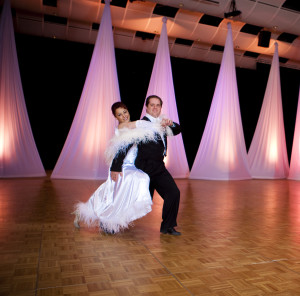 1911 -Maurice Mouvet and Madelaine D’Harville first captivated the American audience when they performed the Apache dance in New York in 1911. Verne and Irene Castle then took it up and danced the tango in Boston.  It was promptly banned and people jailed for dancing this provocative dance. The Castles began to refine the tango and educate New Yorkers about the tango.

1912- The Argentine tango was absorbed into the general society with the passage of universal suffrage in Argentina.

1914- The declaration of World War 1 began the decline for Tango in Europe –Among the New Yorkers was one of the Castle’s teachers, Arthur Murray.  Arthur Murray is responsible for the development of the American style Tango through his mail order teaching system.

1921-. The Tango surged in popularity in America with the release of the film, “The Four Horses of the Apocalypse” starring Rudolph Valentino. The Tango has remained popular in movies ever since.

1929- The great depression influenced the decline of the argentine Tango. The argentine Tango came back under the government of Juan Peron. The music of Calos Gardel inspired many until his death in 1935.

1930’s– International tango took on a new styling in the mid 1930’s, as a German couple took the competitions by storm with a staccato styling, faster music, and longer strides. This gave new life to the Tango and birth to the international style of Tango as we know it now.

1950’s- The tango began to decline in Argentina. With the overthrow of Peron, the new government discouraged tango, because they felt it encouraged ladies to work in bordellos. Coupled with the new American Rock and Roll, the Tango slipped into obscurity in Argentina.

1990 –Broadway opens “Forever Tango” and kicked off the revival of the Argentine Tango in America.

1984– The Tango band was lifted and it was officially dedicated as the dance of Argentina.

History of Tango captured in film and movies

For more dance tips, join my email
or for personal coaching or adult dance classes and lessons south of Denver, north of Highlands Ranch, east of Greenwood Village, west of Ken Caryl,
in Littleton contact:

One thought on “Timeline for the history of Tango Dance”