Adventures in Dance with Cartoon Princesses at Western Welcome Week 2016 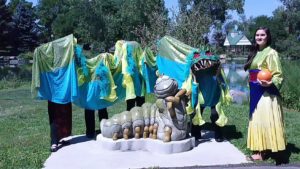 Crash, bang, boom! The sounds of a parade lining up permeated the air on Saturday August 20th 2016. Everyone likes a good parade, and Littleton has been putting on a great parade for 88 years. Adventures in Dance with the Historic Downtown Littleton Merchants Association got to march in this year’s parade. With dancers dressed up as cartoon Princesses and a Chinese dragon named Diamond Lil (carried by Susan Lowe, Sylvia, Shayao, Jamie, and William), we hit the street. The lineup stretched deep into the neighborhood South of Littleton Blvd, as the parade got ready to begin. The parade made its way down Littleton Blvd from Datura Street, 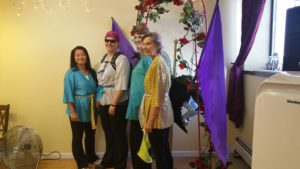 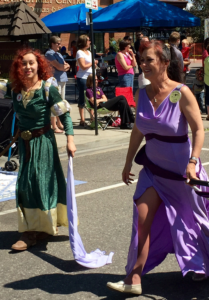 just east of the Woodlawn Shopping Center, all the way down to the Melting pot, where the judges’ stand was set. 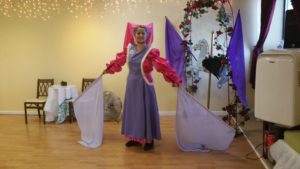 From the end of the parade, the princesses Aurora (Rachael) Meg (Holly), Merida (Robyn), Maid Marian (Juli), Mulan (Sabrina) and King Arthur (Craig),  made their way back up the street to the entertainment stage. At the Adventures in Dance booth we got a snack and a drink and acquired the Youth Squad. The Youth performers of the day were Noah, Josie, Kameryn, Austin, and Aiden.

Sleeping Beauty was the theme for our next set. We started with a Viennese Waltz solo with Arthur (Craig) and Aurora (Rachael) to “Once upon a Dream” from the original Disney Sleeping beauty. Then the youth squad came out and performed another Viennese Waltz to “Once upon a dream” by Lana Del Ray as featured in Maleficent. Last for this set we did the historically accurate dance for Sleeping Beauty, the country dance version of “Greensleeves.”

Merida then ran onstage to give Mulan a bear hug. Mulan threw her off and taught her the proper Chinese bow. In attempting to bow, Merida head butted Mulan, and they broke into a sword fight. Merida disarmed Mulan, then tripped into Prince Phillip and Mulan swung and missed Merida, but hit Phillip, who went to hit her back and elbowed Maid Marian in the face. Maid Marian grabbed Phillip by the hair, gave him a talking to and gave him a few hits to the stomach. After kicking Phillip when he was down, King Arthur came on to stop Marian, and she slapped him. Arthur drew his sword on Marian, then Merida came to the rescue with a battle axe yelling “Princess Power!” and got the heavy axe stuck in the floor. Arthur now had Merida at sword point and Mulan yelled “Mushu attack!” tossing a red dragon between them. Merida got her axe free and engaged Arthur. She ended the fight by stepping on his foot to disarm him, then Mulan joined her as they kicked him in the groin for an instant take-down. Merida tried to bow nicely to Mulan, and Mulan gave Merida a huge Bear hug.

Seth Maisel then took the stage to unmask the duel that we had just demonstrated, and to teach the audience how to stage fight.

Our last set was for Robin Hood. Youth squad started with a swing routine based on the original Robin Hood by Disney with the foxes, to “Phony king of England.” Prince Phillip (William) and Merida (Robyn) then danced a swing from the Jungle book “I want to be like you” which was the same swing sequence in “Robin Hood” and “Jungle Book.” The youth Squad came back on for the historically accurate dance for Robin Hood, Toss the Duchess.

We ended the show with a repeat of the Saltarello, and taught the audience to strip the willow and to dance the Turkish Brawl. It was a beautiful day for parades and dancing.

For more dance tips, join my email
or for personal dance instruction, coaching, weding dance, or adult dance classes and lessons in the Rocky Mountains and Metro Denver, contact