How to Dance the Kalamatianos, with Hercules and Megara, a historically accurate cartoon princess dance. 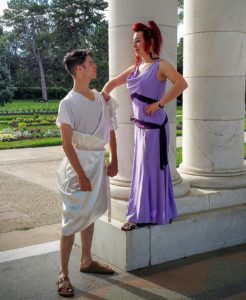 Don’t you feel great when you dance? Partnership dances date back to ancient Greece. Hercules even danced with Terpsichore the goddess of dance in a Disney TV episode of young Hercules. Most dancing was done men with men, and ladies with Ladies. The one exception was the Kalamatianos. This ancient Greek dance was the one exception where men and women danced together. It was done in a circle for weddings with men and women holding hands. When Hercules and Meg got married this is the dance they would have done. Recently the Kalamatianos was danced at the end of the movie ‘My big fat Greek Wedding’ at Ian and Toulla’s wedding reception.

The Kalamatianos is an ancient dance. Its roots can be found in the writings of Homer describing ladies inviting gentlemen to dance with a handkerchief. Mandili Kalamatiano is a traditional Kalamatiano song, who’s English title is the ‘Kerchief from Kalamata’, and this is the song I used in the video. At modern Greek weddings it is commonly called “the brides dance” because the bride will lead the wedding party in this as a line dance. 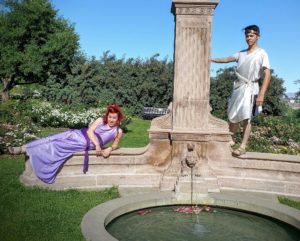 How to Dance the Kalamatianos:

Begin in a circle, turning counter clockwise, facing the center holding hands, or holding a kerchief.

About where we filmed: 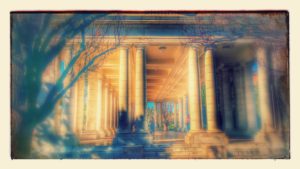 We picked the Pavilion at Cheesman Park Denver because it was buried in history. In 1859 Cheesman Park started out as Mt. Prospect cemetery. In 1872 the U.S. government took the land claiming the land as part of an Indian treaty. In 1873 Denver bought the property from the U.S. Government and turned it into City Cemetery. From there it fell into disrepair until the neighborhoods grew up to its borders and demanded something be done with it. By 1907 it was transformed into a city park and named after the real estate developer, Walter S. Cheesman.

The marble pavilion we filmed in was built in 1909 by Alice Cheesman and her Daughter Gladys Cheesman. These ladies donated this neoclassical structure and the Italian fountains out front on the contingency that the park was re-named Cheesman Park.