Dancing with the Monstars: 2016 Fall Showcase

On the evening of October 2nd, 2016, ten couples filed onto the dance floor for an evening of fabulous performances and good food.  All 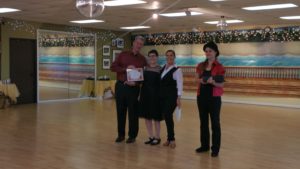 around the room was laughter and a variety of dancing as couples eagerly waited to showcase the routines they’d worked so hard on. When the couples were all warmed up, everyone crowded around the grand table, talking and laughing before the festivities began.

Our opening dance was a beautiful Viennese Waltz by David La Count and Bridget McGarrity. After a little persuading, David led the beautiful Bridget onto the floor where they graceful swayed and spun to “Nothing Else Matters” by Metallica. After their final dip the crowd erupted in cheers, eager to see more dancing as the night progressed. 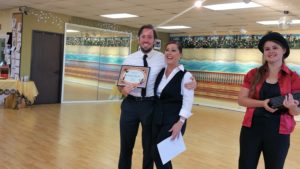 David and Bridget were soon followed by Rodolfo Trigueros and Holly Collins-Tomazin. The music began slow and soft as Holly and Rodolfo began to Rumba to “Ocean” by Richard Hawley. Then suddenly, the music changed to “Corazon” by Santana. Our dancers sped up and glided smoothly across the floor in a cha-cha. The crowd roared as they spun out and bowed at the conclusion of their dance.

After a brief pause, the couples made their way back onto the floor for a dancing intermission. After a few dances they took their seats again in anticipation of the next performers. Chris and Emily Lundberg  marched onto the floor for their first solo performance. The song, “Killing 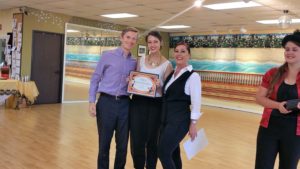 me softly” began softly as they began their routine. After a dramatic Around-the- World dip, the beat started and the couple danced a beautiful rumba that earned a heavy applause from the crowd.

Next, Ron Lowery and Chelle Stanley stalked their way onto the dance floor for their feisty Tango from Cirque du Soleil. They glided, dipped, and spun their way across the floor in a breathtaking display. Then, beaming, they bowed to the crowd, overwhelmed by a clapping praise. 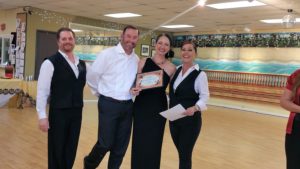 Holly Collins-Tomazin reappeared, this time in a whole new costume, for the final performance before the next intermission, this time with a tall dark and handsome gentleman on her arm. Grinning next to Melvin Marcusson, Holly informed the group of the history behind her routine with Melvin. She delved into a tale about Mary Quite Contrary, the lovely maiden from “Babes in Toyland” who the dastardly Barnabus (Played by Melvin Marcusson) was trying to romance into marrying him as he serenaded her about a “Castle in Spain”.  With a stomp they began their Paso Doble and Cha-cha. Smiling they danced and twirled across the floor until finally they ended in a cuddle-position looking into each other’s’ eyes while the crowd cheered for more. 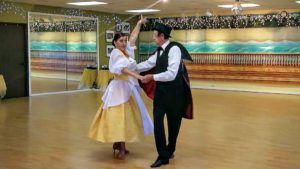 Once more the couples returned to the floor for another dancing intermission before it was time for Rachel Williams and Craig Tomazin to take to the floor for their waltz. After a fabulous introduction from Holly, the piano introduction to the song “Dream Catcher” by Masters of Modern began to play. Craig and Rachel floated lightly as they danced around. With a laugh, Rachel and Craig bowed at the end of their routine, listening to the audience’s praise.

The next super-duo, Holly’s two favorite shades of Gray, Larry and Sheryl took to the floor for their Bolero that reflected how they love each other, “Truly, Madly, Deeply.” Shortly after their song began Larry dipped his beautiful opponent and they began to dance gracefully. Their routine was amazing, and the crowd agreed. All smiled, Larry took Sheryl back to their seats and waited for the next couple, dancing at different speed than all the others.

The wonderful mother-daughter duo, Shayao and Sabrina McFarland escorted Holly Collins-Tomazin (In yet another costume) and Craig Tomazin onto the dance floor. After their introduction, the pairs crouched, waiting for their 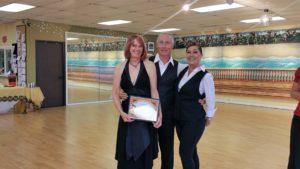 song. “Dear Future Husband” by Megan Trainor came on, and strangely, the pairs stayed crouched. But suddenly, the music kicked up and the pairs popped to their feet to begin their jive. The crowd cheered them on, clapping to the beat. To the surprise of the crowd, Sabrina and Holly dropped suddenly to the floor and ducked as Holly and Craig walked over them. This cool move made the crowd scream in applause, then quickly hush to watch the jive as it continued. 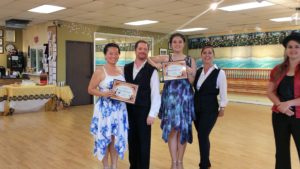 William Hooker, and Holly Collins-Tomazin and Craig Tomazin. Robyn and William danced a dramatic medley of dances to “In the Dark of the Night” by Jonathan Young.

Holly and Craig danced a beautiful waltz to “Requiem Fur Einen Engel” Bjorn Casapietra. After the cheers for each routine died down, everyone flocked to the buffet for a fabulous meal before dancing the night away. It was a wonderful evening of fun and dancing. 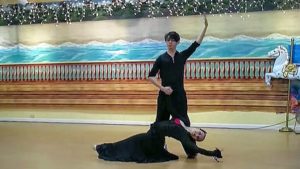 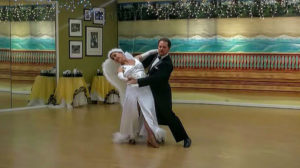