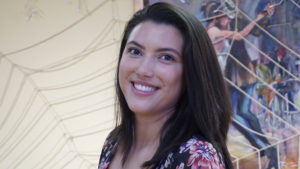 How To Apply Baroque Makeup for Belle from Beauty & the Beast

Ever wonder what Belle from “Beauty and the Beast” would have looked like if she were portrayed historically accurate? Belle would have lived in seventeenth century France, also known in history as the Baroque era. Baroque is the term that describes the period between 1600 and 1750 in Western Europe. This era was filled with unique art, music, fashion, and make up styles. In this blog, I will be giving you a step by step process of how to apply historically accurate Baroque makeup, similar to what Belle would have worn, while using modern makeup products. I did not want to use the dangerous cosmetic products that were actually used back then, and the reason why will be made clear later in the blog.

If you look at art that was created during the Baroque era, I recommend looking up works of art by artists Peter Lely or Cornelis de Vas, you will notice the style of makeup women wore back then.

Fair Skin: In the seventeenth century, it was a sign of wealth and nobility if your skin appeared as if it had never been exposed to sunlight, the fairer the better. It portrayed to others that you could afford to never spend a day working outside in the sun. Since this perfect complexion was not easily attained during a time characterized by poor hygiene practices, women and men turned to makeup.

Baroque Make-up How To: 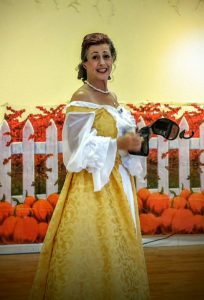 In the Baroque era, a mixture of white lead and vinegar were used as the base for makeup. I used a pale makeup base since I do not condone lead poisoning, which often happened in the Baroque period.

Women would douse their face, neck, and décolletage with powder to ensure they had as light of skin as possible. I used baby powder all over Holly’s face to recreate this look.

Rosy Cheeks and Lips: Women wanted to look as young and fresh faced as possible, so this meant a nice flush of color on the cheeks and lips.

Back then white lead and red coloring were mixed to make blush. I used a bright red powder blush.

Cochineal was used to make lips red; cochineal is a type of insect that can be used to make a red colored dye. I think it’s safe to say Mrs. Holly preferred we use a non-insect based lip liner.  So I used an over the counter red lip liner all over.

Dark Beauty Marks: Marilyn Monroe was not the first woman to make dark beauty marks in style, Baroque women started the trend a couple centuries before.

I used a black eyeliner to darken Holly’s beauty marks; with all the face makeup, beauty marks usually were under a thick layer of powder and lead, so women would go over them with black kohl to make them darker and more prominent.

This completes my version of historically accurate Baroque makeup and what Princess Belle would have actually looked like in real life. Be sure to check out the video in this blog to see Mrs. Holly transformed into a Baroque Beauty.