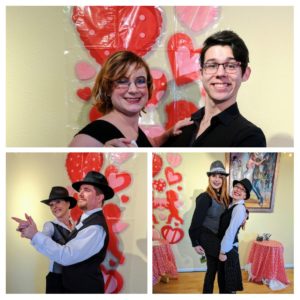 Do the happy dance this Valentine’s Day! That is how the students of Adventures in Dance celebrated this year. They had two great ballroom and Latin dance events to choose from for Valentine’s Day.

The first fun event was the Valentine’s Ballroom and Latin dance potluck party. Dancers brought in tasty treats to share for a discount at the door. After some mingling, they put on their dancing feet and danced Waltz, Tango, Foxtrot, Viennese Waltz, Quickstep, Cha-Cha, Rumba, Swing, Jive, and hustle. To mix it up there were a couple of line dances and mixers. It was a great Pre-Valentine’s party.

The next event was to die for. Literally. It was the “Death of a Godfather” dinner dance, a murder mystery party. Part assignments were emailed to participants early in the week, so costumes and characters could be compiled. Everyone had a motive, and they were ready to solve the crime of who killed the Godfather. 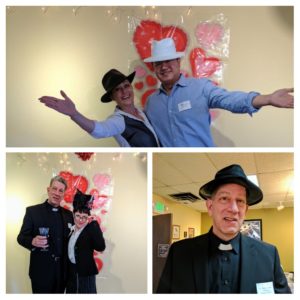 The evening began with appetizers and drinks. Craig and Holly performed the history of Quickstep. Then the first round of clues were read. The evening alternated between the reading of clues, dancing and a lot of laughter. At 6 :30pm we sat down to a delicious Italian dinner provided by Tony’s meats. In the final round the murderer was revealed as we dined on delicate cannoli. 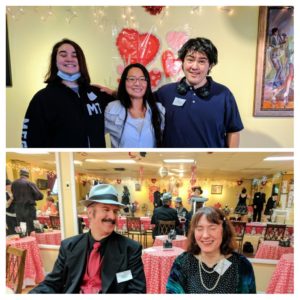 Sabrina McFarland as Daria Dellarosa-
Daughter of Nico & Anna, exciting and adventurous rebel
Shayo McFarland as Marietta Waitressini-
Tony’s girlfriend works at Capproni’s Restaurant
Scott McFarland as Luca Grodi–
head bodyguard for the Godfather,  will do anything, if the price is right!
Daniel Kueh as Salvatore Castellano –
Leader of the Castellano family he has been trying to merge with Nico
Rachel Williams as Frankie Ferrari–
Movie Star & Singer introduced into Hollywood from the Godfather
David LaCount as Fr. Patrick O’Reilley-
Catholic priest and good friend of the Dellarosa family
Bridget McGarrity as Natalie Knose-
TV Interviewer & Reporter & Tom Sutton’s sister interviewing Nico. 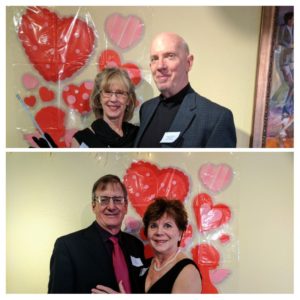 
Valentines was a holiday to remember when you are dancing at Adventures in Dance. Be sure to join us for our next dance adventure.