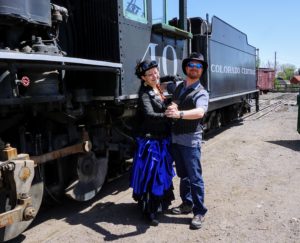 My daughter invited me to the steampunk festival at the Colorado Railroad museum. After a little research, I found that outfits would be anything from Victorian to Edwardian periods to rock a steampunk style. A little more research and I dug up what Steampunk dances are.

The fictional steampunk era began with the steam engine, and ended with daylight savings and the two-way radio. It celebrates invention and technology, as well as the elegance of the Victorian era like tea parties and dancing.

I had previously written a timeline for the Victorian dances, but I stopped in the 1870’s. You can read about those dances here. Steampunk would continue until the end of world war 1. In this article I will look at 4 dances from 1870-1918.

Dances of the early 1900’s were influenced by the world around them. Some of these dances include the Apache tango, the Slow Waltz, and the animal dances the turkey trot and the Foxtrot. Each of these steampunk dances has their own story.

1-Apache Tango
The Apache tango, named after the 1898 French gang by the same name, was known as the dance of death, a tough dance of the underworld that looks like rage to music. It came about from a gang war in London, The Apache gang had a confrontation with the police, and won. They were so proud of themselves that they developed a version of the tango to demonstrate their violent exploits. This tango became popular at clubs like the Moulin Rouge. Wealthy ladies a taste of the underground, or looking for a hint of danger, would pay gang members to give them individual instruction at their homes. In response to this less than moral pursuit, as well as the risqué kicks showing the ladies ankle, the tango was banned.

The slow waltz has a fascinating story. German bands were the best at playing Viennese Waltzes and in high demand. During WW1 it was no longer acceptable to hire German bands. The remaining bands did not play waltzes as fast, and so the slow waltz was born.

4-Foxtrot
The last of the animal dances the Foxtrot, remains popular even today. This fancy trot began as the with Mr. Frisky of Frisco by Harry Fox. It was later re-worked as a prelude act to the Ziegfeld Follies and known as the Fox-Trot. It was considered so scandalous that even Verne and Irene castle refused to teach it. Today it is a popular wedding and competition dance.

What do you think about steampunk dances? Leave a comment below.

One thought on “4 Steampunk Dances”