Pirates and princesses dancing at the Wild on Littleton Block Party 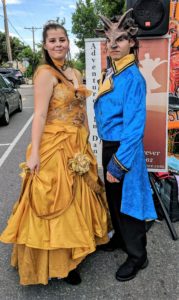 Littleton has a reputation for doing the unusual. From the rooftop whoopee concert series, to the turkey leg and wine hoedown, Littleton events are never boring. The circus themed Wild on Littleton Block Party was a blast this year.

The entertainment stage in front of the Elk’s club was graced by the dancers from Adventures in Dance. The youth squad (Taigen, Noah, Josie, Juliana, Sabrina) and young adult competition dancers (Robyn & William) performed a variety of dances. From historic and ballroom dances to Latin dances, they burned the floor.

The first show featured pirates and princess dances. The youth squad kicked off with the renaissance court dance the Pavanne, then they danced the medieval dance Toss the Duchess. Then Juliana and William took the stage as Beauty and the beast. They danced a Minuet and variation of the Viennese Waltz to the live action version of “Beauty and the Beast.” The youth squad returned to dance a line dance version of the Saltarello, followed by the Celtic dance Strip the Willow. Then it was time for a Paso Doble version of Pirates of the Caribbean danced by William and Robyn. Everyone likes to 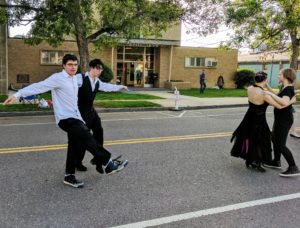 scold their partner, so the youth squad demonstrated the dance the Washerwoman’s Brawl and invited audience members to join in, like our DJ Larry O’Connor. Then they danced the Turkish Brawl renaissance dance.

The 7:30 show was dedicated to ballroom dances. The youth squad had competed at the USA dance, and shared their competition routines with the crowd. They danced a standard ballroom Waltz, Tango, Foxtrot and Quickstep. Dancing silver American smooth routines between each youth demonstration were Robyn and William. They danced their Viennese Waltz, Waltz, Foxtrot and Tango. To close the show Holly Collins taught the audience the cupid shuffle, and invited the audience to join the dancers as they had fun with this popular line dance. 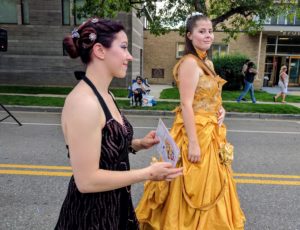 As twilight was creeping in, Adventures in Dance came back to the stage for their third and final show, their Latin Dance set. The Youth Squad Danced their competition Samba, Cha-Cha, Rumba and Jive. Robyn and William danced their Sliver Latin Jive and Samba, then they changed to some popular dances. Picking inspiration from Dirty Dancing, they danced a Mambo to “I’ve had the time of my life” utilizing moves from the movie. Then to close the show, they did their cha-cha interpretation of “Uptown Funk.”

As the sun set, fireworks lit the sky. It was the best fireworks show before the 4th of July. Fireworks were fired off the Plate river, and off the tops of Littleton buildings. I had the best view from the balcony of the new View house restaurant 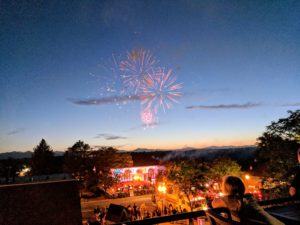