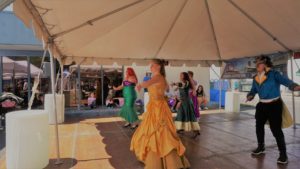 Don’t you love a good parade? Littleton does! The Littleton Western Welcome Week celebration is marked with a parade and street fair. The dancing princesses from Adventures in Dance brightened the day with a dancing dragon, princess, and photos.

The dancing princess and the dragon lady dancers got together at Adventures in Dance early Saturday morning for the Western Welcome Week parade. Dragon ladies Susan Lowe and Jane Braithwaite headed up Diamond Lil, the Chinese dancing dragon. Under Lil were Noah as Beast, William as a pirate, Taegen as Rapunzel, Juliana as Belle and Holly as Snow white. Leading the dragon with the # and sign was Robyn as Merida. They had a great time dancing a serpentine and chasing her tail in front of the judges stand. 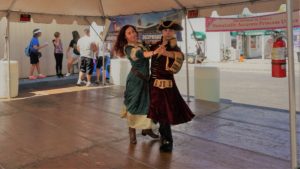 The princesses then graced the Western Welcome Week entertainment stage. They danced foxtrots, waltzes, swings, rumba’s, cha-cha’s, samba’s and Paso Doble’s to ballroom and Latin princess songs. Noah and Julianna danced a Viennese Waltz solo to “Tail as old as time” as Beauty and the Beast. Kamille and Holly danced a cha-cha to “Kiss the Girl” as Ariel and Snow White. Taegen and William danced a waltz to “someday my prince will come” as Rapunzel and Pirate. Then William and Robyn closed the show dancing “He’s a Pirate” paso doble/tango as a pirate and Merida.

After the dance show, the princesses got audience members up to dance with them. The sea folk with Merida, Ariel, and Pirate taught the audience a traditional Scottish ceildh (celtic) dance called strip the willow. The medieval team of Belle, Beast and Rapunzel taught the audience the Turkish brancile (brawl). Then the two teams joined up to form a great circle. They taught the brancile de original known as Toss the Duchess. When the dancing was done, the princesses posed with little girls and puppies.

Following the dancing princesses, the staff from Adventures in dance put on a Ballroom and Latin show.  Craig Tomazin and Holly Collins danced a Swing, a Paso Doble, a Waltz and ended with a minuet/foxtrot from Beauty and the Beast. Robyn and William danced a mambo from Dirty Dancing to “I’ve had the time of my life.” Then they danced their competitive Rumba and Jive. They followed this with their show cha-cha to “Uptown Funk.” They closed the show with an interpretive samba to “Rain”.

Craig Tomazin Dj’s the rest of the shows from other schools from around Littleton for the rest of the day. It was a great parade and street festival. If you haven’t gone before, add this to your bucket list.

There are no upcoming events at this time.