Littleton Pumpkin Follies gets Pirates of the Caribbean. 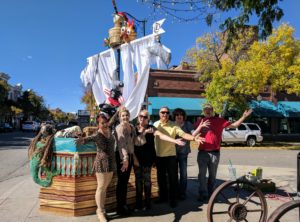 Don’t you love fall? In Littleton, fall brings brings fun festivals and activities, like the award-winning Pumpkin Follies and Goat Show. This is a merchant competition to build the most creative pumpkin pole in Littleton.

Historic downtown Littleton merchants are divided into pumpkin pod teams of 2 to 4 merchants. Each team is tasked to mold a 14-ft. pole and 10 pumpkins into something creative. Team 1 had one week to agree on a design, delegate creation, and re-group to assemble before the judging begins. 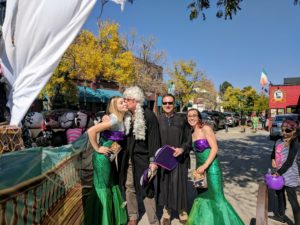 The pumpkin pole judging began at high noon on Friday the 13th. The judges met at Reinke Bros, Inc. to get decked out as old-fashioned judges, with classic white wigs and black robes. From there, they surveyed the poles to be judged. Each team was welcome to bribe the judges in hopes of influencing the votes in their favor.

Adventures in Dance was paired with Hard Charging Homes and Western Welcome Week. This dynamic trio put their heads together and came up with a Pirates of the Caribbean, On Stranger Tides theme. They built a pirate ship around the base of the pole, strung a mast with crow’s nest, assembled pumpkin headed pirates, a treasure chest, and attached a mermaid to the prow of the ship.

Littleton merchants gathered just before noon to add the finishing touches. A smoking skull was set on the poop deck. Ladies dressed as sirens of the sea, and treats were ready to be handed out by the deck hands. 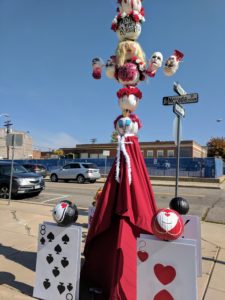 Judges were greeted by the sweet sounds of sea chanties. Jr. pirates gave them treats. Mermaids lured the judges in with kisses on their cheeks. They succumbed to the seductive solicitations. Pirates of the Caribbean took first place.

Second place went to the Queen of Hearts, a lovely pole with the queen at its center. She was surrounded by a deck of cards and those who had lost their heads.

Third place was to die for. It was a dynamic setting of the Addams Family. With Lurch looming over Gomez, Morticia, Wednesday, Pugsley, Uncle Fester, Cousin It, and Thing. It was a grave scene.

Remember to cruise the streets of Littleton and admire all the pumpkin poles. Every team gave it a valiant effort, and are all wonderful to look at. The 31st of October is the deadline to get out and see the pumpkin poles. 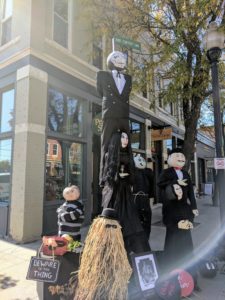