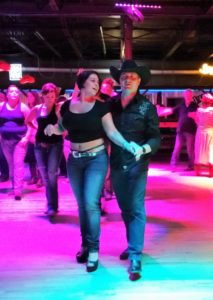 Texas two step is one of the most popular country dances today. Anywhere you find country western music you can find couples two stepping. But where did this delightful ditty come from?

If you ask a cowboy they may tell you a tongue in cheek tail. The two step was developed because the cowpoke got tired of dancing the one step on the right foot, and added the second step so he could change weight to the left foot as well. Then he called it the two step, right then left. I also heard that it came from stepping between cow patties. Run quickly between the turds, then stride slowly till the next.

Fun as these tails are, neither is historically accurate. Country music took off in 1925 with Nashville broadcasting the grand old opry. The new music was embraced by square dancers around America. One group of Texas Square dancers picked up the collegiate foxtrot and began to dance it between sets. Before long this one step foxtrot became known as the Texas two step.

Many of the dancers in Texas are of German and Polish decent, and they brought their native dances with them. Many of the moves from ancient dances like the Landler, Varsovienne, and Polka can be seen to permeate the popular two step of today.

Texas state university instructors call the country two step the “poor man’s foxtrot” with it’s county boots and southern roots. It is the plain clothes version of the sophisticated foxtrot. The country two step reversed the rhythm to quick, quick, slow, slow, to set itself apart from the ballroom foxtrot.

In the 1980’s the country two step was re popularized by John Travolta in the movie urban cowboy. Two step continues to grow and change with the influence of ballroom technique. Country dance competitions challenge dancers to step up their game and two step to the top.

Where to dance Two Step

In Denver you can find the best clubs in the US to trip a tidy country two step. In 2016 the Grizzly Rose won the best dance hall in america at the Country Music Awards. You can also go for a spin at the Stampede, the Cowboy bar, and at Buckskins. 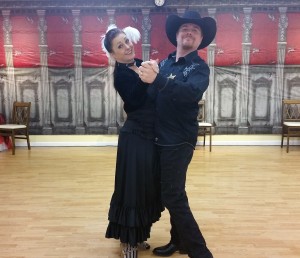