The Kingdom dance in “Tangled” made me want to get up and dance. In the Disney film “Tangled” the Kingdom dance began in ¾ time waltz rhythm, then changed to 2/4 polka rhythm. Rapunzel danced a form of polka in the street. However, the Austrian Landler would have been a more accurate dance for princess Rapunzel.

The Landler started off as an Austrian folk dance around 1690. Some rumors are that the Landler was invented by an Austrian shepherdess. It gained popularity with the masses making its way to Vienna. Composers like Mozart wrote Landlers for laborers instead of minuets for lords. With the French revolution minuets fell out of popularity and the Landler replaced it as the people’s dance.

In 1776 Vincente Martin’s Opera “Una Cosa Rara” featured a Landler waltz. This accelerated the popularity of the Landler Waltz. As the dance floors became smoother and hob nailed shoes were cast off in favor of softer shoes, dancers could spin around the floor with ease.

German Waltz as described by Thomas Wilson 1816- Wilson notes that the German waltz is danced with flat feet while the French waltz is danced on releve on the toes. This waltz basic is danced counter clockwise while turning around the ballroom.
“German waltzing has but one class of movements in its composition; …
The (man’s) left foot is passed into second position on the flat foot; … bringing the right foot behind the left, raising the left foot a little; … placing the left foot… in a close position and turning the body.”

(Begins on the right foot, this description picks up with the second beat)“The lady,…left foot…in front, and her right foot is immediately afterwards brought into the fourth position in front again…” 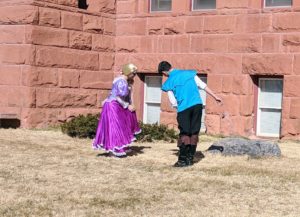 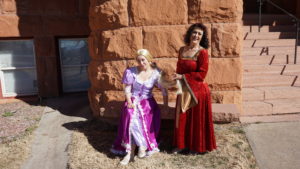 Prince Laendler by The Wiggles We filmed on the lawn of the Westminster Castle in Colorado.  It is a big red castle in Westminster owned by the pillar of fire. It was originally built to be the Westminster university in 1893 designed by Stanford White. This Richardsonian Romanesque style castle is built out of red sandstones mined from Red rocks and Manitou area.

The Westminster Caslte operated as a school as a school until 1917. In 1915 the board voted to be a men’s only college. Shortly after war broke out and all the men left for war, leaving the school to close its door in 1917. Three years later the big red castle was purchase by the Pillar of fire church to operate as a school again. With the school came a radio station. KPOF began broadcasting in the big red castle in 1928. They are still broadcasting there today. Thanks to KPOF, we were able to film at the Westminster castle at 3455 W 83rd Ave, Westminster, CO 80031.

Thank you to the Adventures in dance team for making historically accurate princess dances. Each of you have been willing to go out of your way to make magic with history. Without all of you we would not have this wonderful series to share with Frontier girls and Quest Club for Kids. Thank you.