Recently I was asked to speak on the history of ballroom dance for the ballroom dance day. On Saturday April 28th I was able to share my experience tracing the origins of ballroom dance back in time. I have divided this lecture into three periods in history. Middle ages to Baroque, Regency era through the Victorian era, ending with the 20th century.  This is the first section beginning in antiquity through the baroque periods. 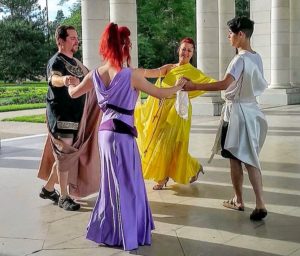 Take an adventure, a dance adventure back in time to the beginnings of time to discover the origins of ballroom dance as we know it today. Travel back to ancient Greece. The first dance where ladies and gentlemen danced together in the same circle. At this time gentlemen and ladies would only dance in separate circles.

However, Hercules and Meg would have danced together at their wedding. The dance they would have danced was the ancient Greek dance the Kalamatianos (link). It was danced side by side in a circle dance with a scarf in between the gentleman and lady. If the lady wanted to dance with the gentleman she’d offer a scarf, or the gentleman would offer her a scarf and they would dance in the same circle at the same time. This dance is still done today on occasion at Greek weddings.

Ballroom dance in the middle ages

Next, we enter the medieval, or dark ages. The medieval period was called the dark ages because it had more knights. This was the first time we know that lords and ladies were dancing “together” holding hands side by side or in a circle. The first dance where a gentleman put both hands on a lady was the Branle de original or toss the duchess (link).

You could picture Robin Hood lifting Maid Marion from his right side to his left in this ancient brawl. To remain modest, ladies would strive to hold their skirts down as they were tossed, heavenward. I was not considered polite to show off a lady’s ankles. Even though the dance Toss the duchess is not common today, the song “Ding Dong Merrily on High” survives as a modern Christmas carol.

Ballroom dance in the Renaissance 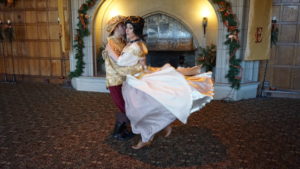 The Renaissance era had an explosion of dance and culture. New dances were popping up everywhere. Processional dances like the Pavane (link), which is the predecessor to the wedding march, were popular in Europe courts and the church of Spain.

Catherine De Medici was promoting dance everywhere she went. De Medici developed the first dance schools and introduced La Volta (link) to the future queen Elizabeth. La Volta means to turn and is credited with being the predecessor to the Viennese waltz (link). Scandal surrounded La Volta because the gentleman would wrap his arms around the lady’s waist and lift her in the air with a step called the caper. This variation on a Galliard (link) was banned in France and popularized in the English court.

Ballroom dance in the Baroque era 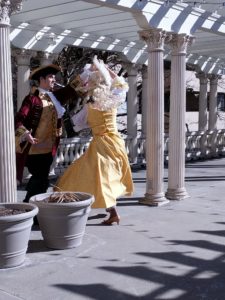 The Baroque era was dominated by the Minuet (link). This ¾ time dance was the intricate dance of royalty and the upper class. With the French revolution, the minuet fell out of popularity.

Deep In the mountains of Austria in 1690 a shepherdess is said to have danced the first Landler (link). With the fall of the Minuet, the Landler filled the void as the peoples’ dance. Composers like Mozart wrote Landlers for the people instead of Minuets for the nobility. 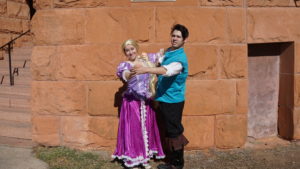 As floors got smoother and hobnailed shoes were shed, the Landler took off. By 1776 it was featured in the opera “Una Cosa Rara.” This Opera sealed the Landler’s popularity and began the end of English country dancing.

The Landler was not accepted without some resistance. Many denounced it as a scandalous dance. Guardians of morality denounced this mad whirling waltz. This was mostly due to the proximity of partners. Close enough to have a conversation without a chaperone.

Timeline for part 1 the history of ballroom dance

1200 BC -Kalamatianos- (link). This ancient Greek dance was the one exception where men and women danced together. It was done in a circle for weddings with men and women holding hands. Kalamatianos is an ancient dance. Its roots can be found in the writings of Homer describing ladies inviting gentlemen to dance with a handkerchief.

1194 AD Branle de original/Toss the duchess – (link). Medieval dance where the man lifts the lady into the air. Most medieval dances the gentleman held the ladies hand. This is one of the exceptions where he would pace both hands on the lady’s sides and lift her in the air.

1508 Pavane- (link), processional dance responsible for the wedding march as we know it today

1556 La Volta- (link) Meaning to turn in French.  Catherine De Medici is responsible for introducing the Volta to the Versailles court in France in 1581. Queen Elizabeth brought La Volta to her court sealing its popularity in England. Characterized by lifting the lady and turning with her. La Volta incorporated a scandalous and intimate hold with the man embracing he lady in his arms to lift and turn her. Skirts could lift to the lady’s bare knees bringing her modesty into question if she did not hold them in place.

1690 the Austrian Landler- (link). danced in heavy shoes, and had animated hopping, spins and speed. This was the predecessor to the Waltz. Some rumors are that the Landler was invented by an Austrian shepherdess in 1690. With the French revolution minuets fell out of popularity and the Landler replaced it as the people’s dance.

1720 when Hobnailed shoes were shed, The Landler is more dance-able as the dance floors became smoother and hob nailed shoes were cast off in favor of softer shoes, dancers could spin around the floor with ease.

1786 The waltz (link). spread when performed in a play was in the opera Una Cosa Rara by Soler, despite verbose opposition to the close embrace. Men and women could get close enough to talk without a chaperone.