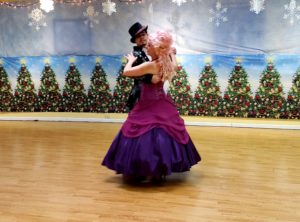 How can there be a fifth dance where there were only 4 Victorian dances planned? The original sugar plum Fairy Antonietta Dell’era hijacked the first Nutcracker adding a gavotte by Hungarian composer Alphonse Czibulka to showcase her abilities. In the same spirit, our Sugar Plum Fairy has hijacked this production to add a Victorian Two Step to the series Nutcracker and the Four Victorian Dances (link). 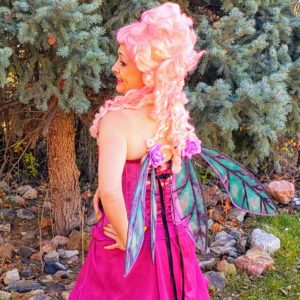 As I was researching the Sugar Plum Fairy, I came across some fun facts. First, that a sugar plum is mostly sugar and no plum. A confection wrapped around a seed or a nut. The character of the Sugar Plum Fairy is everything sweet, delectable, and lovely. Sweet to a fault. 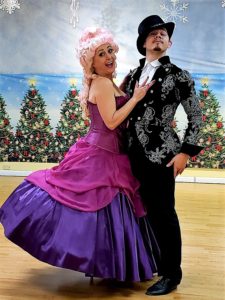 Accompanying our sweet Sugar Plum, is her Prince Koklush. The prince’s name refers to a soothing cough drop. He is a sweet dandy and a flirt. For this reason, he is often referred to as just the prince. 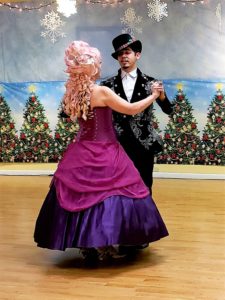 Dance always changes to match the music of the day. In the late Victorian era, beginning in 1890, John Phillip Souza marches were rising in popularity. To go with these marches’ dancers smoothed out the popular Polka to become the (Victorian) Two Step. I refer to it as a Victorian two step, so it is not confused with the (modern) Country Two Step (link) or the Night Club Two Step (link).

How to dance the Glide Two Step

Composed and introduced by Albert W. Newman in 1900.

2b    Two-step, making one complete turn

4b    Repeat entire sequence beginning on right foot, moving “over elbows” along line of dance”

This sequence is identical to the mid-19th century polka sequence known as the “Esmerelda” (named from the hunchback of Notre Dame) but performed with a two-step rather than a polka (link). Newman credits himself with inventing the sequence. 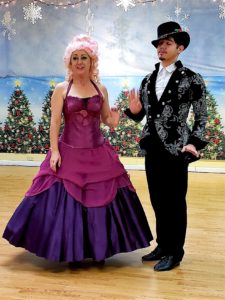 We filmed on location at Adventures in Dance on the super-secret second floor of the Woodlawn shopping center. This space was originally the Fox movie theatre, one of the first movie theatres in Littleton. Set in the realm of winter, flirting kept us warm. The song we choose was the Dance of the sugar Plum from act 2 of Tchaikovsky’s Nutcracker Ballet recorded by Kevin Mc-Leaod You-tube music.

Thank you to all the volunteers who made this happen. 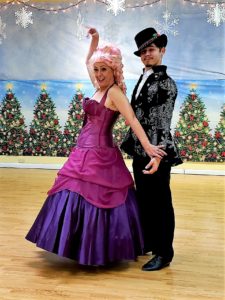