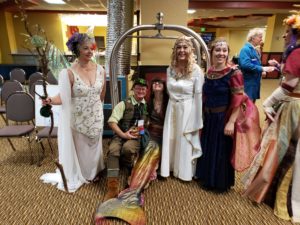 The Myths and Legends convention is a celebration of all myths and legends. The only difference from Harry potter and the Wizards Ball to Tolkien’s Middle earth is time frame. The Adventures in Dance team was privileged to share the art of dance in themed costumes. The MAL Con meets the wizard’s ball and dances of middle earth through the time and talents of the Adventures in Dance team. 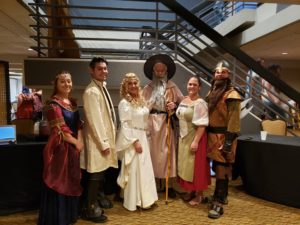 The dances of middle earth were brought back by popular demand from Wester-con last year. Representatives from four realms were present. From Rivendell Galadriel, Elron and Arwen graced the stage with a Bass Dance. Dwarf Gimli danced a Viking fire dance joined by our Hobbit, Maid May Gamgee, for a lively jig from Bilbo’s birthday. Gandalf gave his blessing to the horse’s branle dedicated to his horse Shadowfax. When all the dancing was done it was time for our magical contingent to return to middle earth. To do that the Fairy ring was danced to open a gateway between worlds. 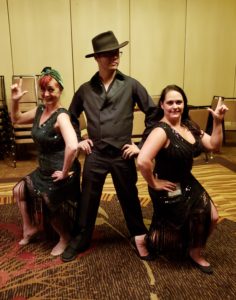 Harry Potter opened another gateway to the wizarding world. On Friday night the Fantastic Beast’s speakeasy featured fun dances from the roaring 20’s. Dressed as flappers Holly, Jessica and William taught fun dances. William taught the Chasity Charleston, (link ). Holly then pared everyone up with partners for Queenie’s Swing. Last Jessica helped teach the Dumbledore one-step. Guests had fun learning how to cut a rug at this themed event. 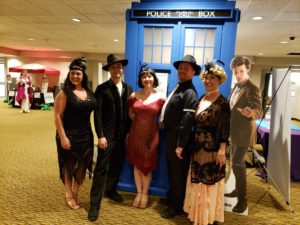 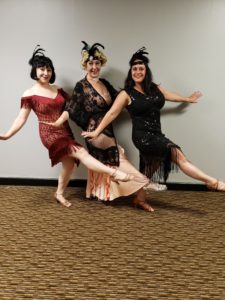 At the close of the show guest got up to join in the Wizard’s ball grad march. Winding their way through the hall they marched with a lively beat that included an arch. Next everyone participated in the Celtic mixer, Strip the Willow. Requests were then made for more wizard’s Waltzes. The Game of thrones Waltz line dance was a popular variation. Then people pared up to learn the Waltz box to fun steampunk music selections. Then the unthinkable, the chicken dance came out. This fun techno variation had everyone flapping and clapping away. After a few requests something old drew dancers back out. Back from middle earth was the branle de original with a couple of new variations. 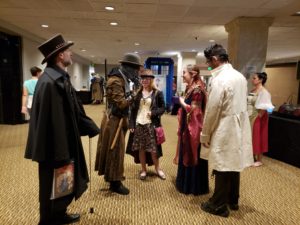 There and back again

It was a great seven year run for the Myths and Legends convention. We were privileged to be a part of their final year for there and back again. Creating fantasy costume to go with fantastic dancing is always fun. Look for us at other Shiny Garden Gatherings. 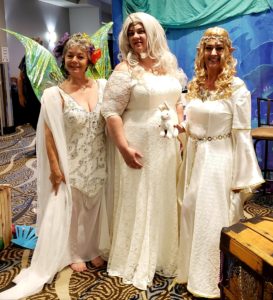