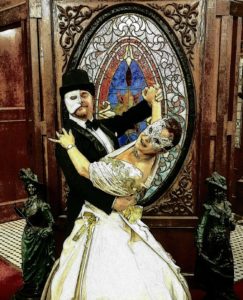 Following the coldest day of the year, Dancer’s gathered at Adventures in Dance for the spooky fun dance showcase. Months of preparation went into each carefully crafted routine that was presented Sunday afternoon. In addition to choreographed routines, some of the students performed in a mock competition format.

A Cover is not a Book Swing

The day began with a bang. Melvin Marcusson tripped the light fantastic to “A cover is not a book” from Mary Poppins Returns. He danced two of his swing routines. His American rhythm swing followed by his international Latin Jive routine. It was a delightful start to the day. 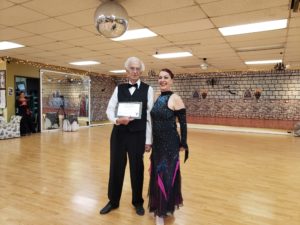 Next up was a Waltz and Foxtrot competition round. Larry and Sheryl Gray were joined by Melvin Marcusson to demonstrate how a competition would look. Sheryl looked dashing in her new blue dress. Everyone had a great round and remembered all their steps. 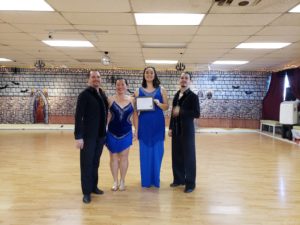 Fabulous formations are fun to do. So, the McFarland ladies did a fun mashup of Rumba, Cha-cha and West Coast Swing. “It’s Time” by Imagine Dragons was the song of choice for this fun routine. It was so good they got to do it a second time for their friends at dinner. 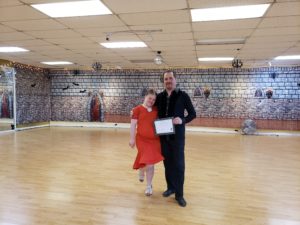 Rumba was the number that everyone was waiting to see. Rachel Prezkuta performed a 007 inspired Rumba to “Golden Eye” with her teacher Craig Tomazin. Her crowd of family members went wild as she nailed all her moves. 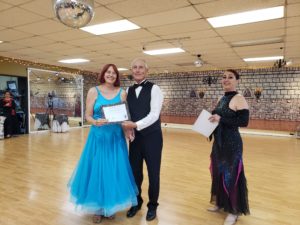 A two dance Tango and Quickstep followed that fabulous Rumba. Melvin & Holly got back up with Larry & Sheryl to dance these ballroom beauties. Keeping all the beats straight was the gentlemen’s job, and they did a great with it.

Social dancing and mixers were scattered between sets. Guest got to know each other in a hot Latin merengue mixer. Next, they learned the seasonal line dance, the Lurch. This was to celebrate the opening of the new Addams Family movie. Everyone had a great time dancing.

The Steam Powered Ballroom show was performed by the staff throughout the day. The first set was the “Fighting Trousers” Cha-cha, followed by the Waltz, Rumba, and the Techno Tango. The second set was a nautical Viennese Waltz to “Lady Marlene” followed by a show stopping Samba to “The Shape of You” and ending with a techno “Sing, Sing, Sing” Quickstep and Swing.

The last set was saved for just before dinner and featured the whole staff. Holly and William performed “Her Majesty’s Secret Service” Paso Doble. Dancing a frisky foxtrot to “Brass Goggles” were Craig & Jessica. The jumping Jive was saved for last, to “In the Techno Mood” with Bill and Robyn.

Dinner at the dance

Don’t miss the next event. From delightful dancing to delicious dining, it was a night to remember. Grab your shoes and join us next time.