The Lurch Dance How To: 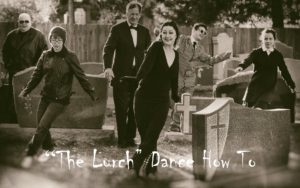 You Rang? Lurch is the iconic butler to the Addams Family. Among his many talents was dance, and in October 1965 Lurch was teaching the kids on the TV show “Shindig” how to Lurch dance to the song “The Lurch.”

At 6 ft 9 in Lurch stands as a gloomy monster butler. According to Addams Family Fandom, Lurch was a descendant of the Frankenstein family of monsters. He was dug up by Morticia, and his heart is from an unnamed Addams Family member. With a heart that beats for the Addams, he is treated like one of the family.

In 1964 the 13th episode “Lurch learns to dance” Wednesday shows Lurch another dance ‘The Drew’, and Gomez jumps in with ‘The Freddie’. The next year on May 14, 1965 the Addams Family episode “Lurch, the teenage idol” aired. In it a record company records Lurch playing the harpsichord and grunting along. He becomes a pop sensation and all the attention goes to his head, creating a monster.

Following that episode Gary Paxton of Capitol Records wrote the “The Lurch” to be a Lurch inspired dance. Ted Cassidy stared as the lead singer and he introduced the dance and performed the song “The Lurch” on September 11, 1965, on the TV show “Shivaree!” He then did it again on “Shindig!” An ABC production aired the song and dance as a Halloween special on October 30th, 1965. Lurch was a star again, but it did not stick as a fad, just as a fun novelty.

The Lurch Dance How To:

In honor of the Addams family releasing, I put together a dance tutorial for “The Lurch.” It is a fun Halloween line dance with only one wall, so you do not need to concern yourself with turning. I will divide it into two sections based on the lyrics.

The first half of the dance is step tap with your arms swinging across your body.

Repeat during these lyrics:

The second section is a grapevine left and right followed by two slow walks forward and back.

Repeat until the end of the song to these lyrics 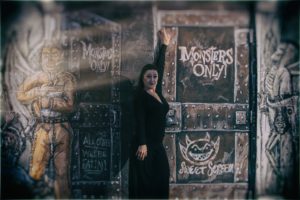 Thank you to Alex Blum for joining us to do a photoshoot. Your photos are an inspiration and I was privileged to use some of them in the video and the post. You can find Alex Blum at https://500px.com/alexblum . 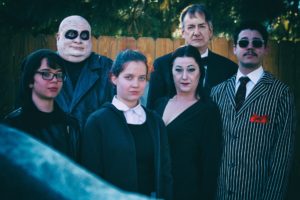 One thought on “The Lurch Dance How To”